Department of Research And Planning 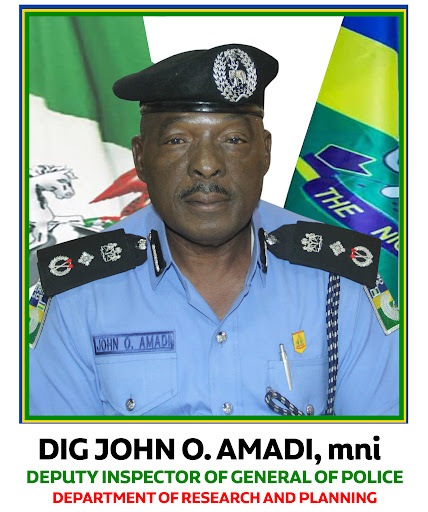 Department of Research and Planning was established in 1975 to ensure standards and uniformity in the delivery of policing service in Nigeria. The department was specifically set up to provide research and analytical services such as monitoring and evaluation function to support mordern police operations and public safety practices.

It is also resposible for identifying law enforcement issues and conducting timely policy research, evaluation, follow-up training and technical assistance on those issues that will provide information and direction to police personnel, police leaders and the community. The department is headed by DIG JOHN O. AMADI mni

With the 1986 Police re-organisation, the department was re-named ‘’Management Service Department’’ (MSD) under the Directorate of Finance and Administration. The MSD had the following sections:-

In 1996, another re-organisation of the Police witnessed the return of the Department of Research and Planning charged with the same responsibility as its predecessors. The presidential committee on reform of the Nigeria Police Force in 2008 did not recommend any change in name or nomenclature of the departments, rather it affirmed that all the headquarters departments should remain but their focus should be on driving the police reform process forward.

However, on 16th March, 2012 the Info - Tech unit which hitherto was an integral part of the department was removed to form an idependent deparment. To effectively perform its strategic roles and responsibilities, the new Department of Research and Planning was realigned into four (4) sections as follows:

In order to key into Inspector-General of Police mission and vision to move the Nigeria Police Force, the roles of each section which are inter-related have been restructured and re defined for better service delivery as follow:
(1) ADMINISTRATION, AUDIT AND INSPECTION
The Administrative section is the pivotal fulcrum and engine room which energises and co-ordinate the units which make up the department of Research and Planning to conduct its external and internal activities for efficient and effective service delivery. The administrative and supervisory function undertaken by this section include but not limited to:
(i) CONDUCTING REGULAR INSPECTIONS OF POLICEFORMATIONS/DIVISION/ SECTIONS/UNITS ETC WITH OR WITHOUT PRIOR NOTIFICATION
Apart from Administrative function, the section is  responsible for Audit and Inspection. For many years now, it has been observed that Police Formations, Commands and Divisions have not been subjected to any form of inspection apart from monetary exhibit inspections carried out by the Ministry of Finance auditors.
Inspection undertaken by the department helps to safeguard standards and ensure uniformity in police operations. Periodically, Team of Inspectors, headed by CP visit Police Divisions, Stations, Units, Area Commands etc, where records, personnel posted on duties, working materials and even environment under which Police operates are inspected to ascertain their level of conformity with policy, effectiveness and efficiency. Reports are submitted at the end of such Inspections with comments to correct observed anomalies. It is the responsibility of the AIGs in the zones to make sure that such periodic inspections are conducted at both zonal and command levels.
(ii) MONITORING AND ASSESSING THE EXTENT TO WHICH POLICE DUTIES ARE CONDUCTED ACCORDING TO LAW, FORCE ORDERS AND THE DIRECTIVES OF INSPECTOR-GENERAL OF POLICE
More often than not, Police men have run foul of the law, due to either excessive use of police power for selfish interest or display of lack of knowledge of the law. Where police does not loose personnel, there is financial cost or wastage arising from Garnishee order. Noncompliance with Force orders and other administrative instructions, can also be costly to Police. In order to remove or reduce avoidable noncompliance actions and consequential cost implications, the Department of Research and Planning monitors and assess the extent to which police duties are conducted according to the law, force administrative instruction and compliance with IGP directives. To achieve this, the department periodically call for returns which are painstakingly scrutinised before being passed for comments, before being sent to all formations, departments, sections, and commands to warn against such mistakes.
(iii) CONDUCTING ANNOUNCED AND UNANNOUNCED AUDITS, SPOT CHECK ETC
Where ever and whenever considered necessary, in order to assess the degree of readiness, vigilance and competency of service personnel, the department conducts spot checks at all levels of Police operations. The department as a matter of routine do inspection and audit of weapons, ammunitions and police property in Commands and Formations custody. To a large extent, this enables police to avoid unnecessary wastage and non-compliance with force orders. The Department thereafter advices on when to replenish stock, effect repairs or possible change of items that may be considered obsolete etc. The approach here is periodic, scheduled/ un-scheduled but sustained visits to Commands and Formations.
(iv)IDENTIFYING BEST PRACTISES AND ENCOURAGING ITS WIDER ADOPTION
By checking records and returns from commands, formations, Divisions etc. the department identifies and acknowledges service where standard are up-held and recommend such standard to be adopted and as a good practice for the force.

The Research and Development section of department of Research and Planning is responsible for collecting, analysing and processing statistical data from commands on vital police functions which are used in policy development for the Nigeria Police Force.

(i) Collation of Statistics: This is achieved by requesting and receiving statistical information on crime, accident, police personnel, traffic violations, human right violation, domestic violence etc, from commands such information are equally stored and made available for force management and other users.

(ii) Preparation of the Nigeria Police Annual Report: The annual report which is a document that presents the activities and performance of Police, ways in which the Nigeria Police Force is developing to meet the challenges, demands and changes facing it is prepared by and published by Department of Research and Planning. The research and development section ensures that all command and formations are reflected in the Annual Report to enable the true position of affairs of the police is reflected. This is essential for policy development as the report reflect on the past, present and the future for organisational growth.

(iii) Periodic Research into problem affecting the force and proffer possible solutions: Occasionally the department of Research and Planning, where possible in partnership with academic researchers explore the origin, causes and probable solution to the challenges of the force and other social problems affecting the organisation. Some of such problems crop up accidently or as a result of transformation in the society in which they perform their duty. This is critically analysed before policy statement is issued.

(v) Conducting Workshops and Seminars Periodically workshops and seminars are conducted for personnel of the force to update their skills on research, data collection and analysis. Such officers are deployed to commands where they are expected to carry out expedient research and forward result to Force Headquarters for policy development. Their proximity to Division, Stations, and to the public is normally of immense advantage.

(vi) Drawing action plan for Police leadership: After a careful research, the section is usually in a better position do draw up action plan which forms basis of policy development for the police force.

The Nigeria Police Force introduced community policing in March, 2002, in partnership with British Council Department for International Development (DFID) which finance ‘’access to justice programme’’. Quite a number of officers have been trained under the programme in the UK and USA since its inception.

The section has the responsibility for the following:

(i) Create awareness and educate the public and the Police about the principle and values of community policing: In order to familiarise the public and the Police with this new concept, the section was assigned the responsibility to carry out lots of sensitisation in different forms all over the federation. To achieve this, policemen who have been trained as community Policing Officers were posted to state commands with the mission of sensitising and demonstrating the concept as well as pointing out the benefit to the communities and the people. So far, there has been appreciable acceptance of the principles by policemen, organisation and individuals.

The community policing officers on ground have also been monitoring progress and gains achieved. It is also their duty to prevent deviations. At the Force Headquarters level, we have been carrying out periodic assessment of the activities of the community policing officers and progress of the principle from one state to another. Unfortunately nothing tangible is coming out from the zones. It is therefore the duty of the zonal AIGs to encourage the officers and men to propagates the concept

(ii) Facilitate the training of change agen-ts, supports and guide them in the work: Pursuant to (i) above, the section within the limited resources available facilitate the training of change agents called Community Police Developers (CPDs) support and guide them in their work to ensure skill uniformity and professionalism. The DFID J4 has been of tremendous help in this area.

(iv) Encourage the Development of Partnerships between the Police and the Community  The Community Policing officers in collaboration with PCRC workout areas of co-operation with the community to find ways by which police could serve them better and above all interface in the area of crime control. Therefore lectures and advice are offered to vigilantes in the communities so that they could operate within the ambit of the Law and still successfully control crime in their communities.

(vi) Facilitate the development of intelligence led policing structures and practices in all police formations. Currently the Department of Research and Planning in conjunction with the DFID is preparing to organise a training workshop for policemen on intelligence led policing in Abuja. The idea is to prepare the mindset of the personnel of the Force for proactive policing.

Servicom, an acronym of the words service compact is an administrative tool to drive the Federal Government’s service delivery initiative that will ensure quality service. In this regard, the section performs the following functions:

(i) Establish and maintain SERVICOM desks at all police commands and formations by having officers trained in Servicom and deployed to the field. They are to treat issues related to service failure on the part of police formations handling Criminal cases etc.

(ii) Draw up the NPF Charter, implement it and make periodic review of same to meet contemporary issues. A chatter is formal written statement describing the rights and responsibilities of a state and its citizens.

(iii) Organise periodic training and workshop to keep officers current at all times of the customer relations/grievance redress mechanism.

(iv) Investigate complaints from members of the public on service failure and make appropriate recommendations. Where any member of the public is not satisfied with police performance in the area of investigation, or any service not well delivered, and such complaint is brought the police authority, it behoves on the officer in-charge of Servicom when such issue is referred to him to investigate and make appropriate recommendation that will within the ambit of the Law assuage the feelings of such members of the public.

(v) Maintain routine inspection of SERVICOM desks of the force to ensure that they remain functional and productive all the time.